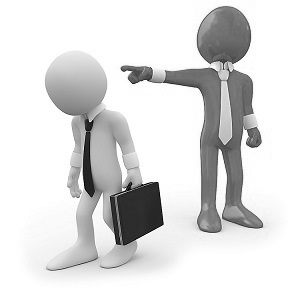 The amount in severance pay is dictated by whose control the reason for termination should be deemed to have been under and whose fault the failure of the employment association should be deemed to have been. Generally speaking there would be no reason – all other things being equal – to award a different amount in severance pay in the event of the employee him or herself filing a request for having their employment contract set aside in the wake of the employer having withdrawn its own request for termination, as the situation would not in essence have undergone any change had the employer in the wake of withdrawing its request for termination failed to give the employee a genuine opportunity to carry on with his or her duties. As it happened, both sides were at fault in the matter at hand for the employee not resuming his duties once the employer had withdrawn its request for termination of the employment contract: the employer in its communications vis-à-vis the workforce in response to the Sub District Court’s ruling had hinted at the employee having failed to put his house in order, whereas the employee for his part had shied away from having a meeting with the acting manager or a mediator prior to resuming his duties. Whereas the severance pay had been calculated on application of a correction factor of 1.4 in the Sub District Court’s initial ruling, the Court – arguing inter alia that the employee in the wake of the earlier ruling had collected 3.5 months’ salary without having had to do any work and without being occupationally disabled – now downgraded the correction factor to 1, in line with a neutral termination scenario.